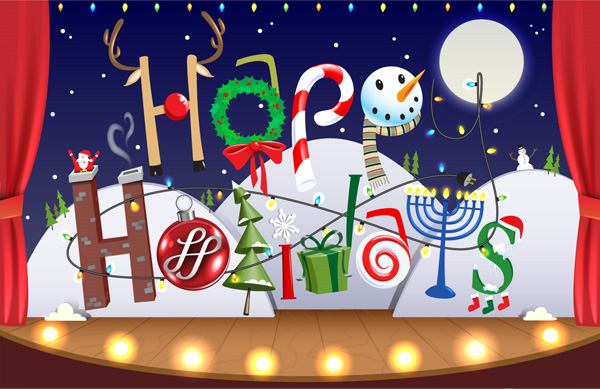 The conventional way of thinking in some circles as the end of the year holiday season approaches is to be sensitive to various religious beliefs - or no religious beliefs. Some argue that everything should be kept so generic and potentially non-offensive that traditional symbols of Christmas or Hanukkah or Mawlid an-Nab or whatever else be kept out of the workplace. Why?
Some have taken this so far as to not use the colors red and green as those are traditional Christmas colors (though not anything that has to do with the original story). So to avoid that, they use colors such as blue and gold which they assume do not look like a religion. Actually those colors are used by a different religion (Paganism) for a different holiday (Saturnalia) also in December. That’s just an example of how hard it can be to try to avoid anything offensive to anyone.
Rather than attempting to make things non-offensive, why don’t we instead create a culture that appreciates and values religious diversity and allows expression of that which is meaningful to another? Appreciation can come through communication - not the absence of it. Prejudice can be overcome by listening to and valuing others - not fearing religious expression.
Sometimes I wonder if we try to be so open-minded that we risk having our brains leak out. We have become so sensitized to avoid offending anyone that we have gone far beyond not only the law, but also common sense. When we tailor everything to not offending anyone we risk making the workplace sterile. Sterile things aren’t alive.
There are several problems with this line of thinking and advice. Courts have deemed items such as Christmas Trees and Santa Clause as secular items that do not require religious accommodation. There is really no legal reason to curtail the use of these secular items, and no real accommodation required.
Even if Christmas Trees or Santa Clause were considered religious expressions the legal obligation for private employers who display religious items is to reasonably accommodate any objections of employees. That typically means excusing offended employees from participating. That’s the standard for displays that are tied to a religion, such as a Manager Scene, a Star of David, a a Star in Crescent, a Menorah, a Cross, a Dharma, an Ahm or any other religious symbol.
Employees actually have the right to some degree of religious expression in the private workplace. Title VII of the Civil Rights Act and court cases based on it require that employers accommodate an employee’s sincerely held religious belief in engaging in religious expression in the workplace to the extent that they can do so without undue hardship on the operation of the business. Is it really an undue hardship to allow that kind of religious expression - or is it more of one to try to prevent it and have a culture of suppression of thought?
Private employers also have the right to display and express their own religious views. Government employers cannot do that because of the part of the First Amendment referring to the “establishment of religion.” But the same amendment also says that the government cannot prohibit the free expression of religion. That applies to business owners.
As a private employer, you can express yourself, and you should, to a degree. Your employees can express themselves, and should, to a degree. Keep in mind though, that allowing one employee to post a Christmas Card of a Manger Scene in her cubicle, means you also have to allow another employee to post a card or scene that depicts his religion. You can encourage and even celebrate that. Yes, you can also suppress it as if that’s a best practice. It’s not. It’s just a prevailing practice. And that’s not the same.
Discrimination based on religion is illegal, just as is racial, sex, and age discrimination and discrimination on a bunch of other protected class categories. Savvy employers won’t operate that way anyway. Some of your best employees will not be just like you, will not look just like you, and will not share all of your beliefs. Instead they will compliment your strengths and weaknesses, appeal to a clientele you might not have reached, and understand your market in a way that’s invaluable to the long-term viability of your company.
Celebrate them. Seek to learn rather than assuming you know what or why they believe what they do. Appreciate them for who they are, whether that’s the same as you or not.
But also celebrate you. Wish your employees a Happy Hanukkah, a Merry Christmas, a Happy Kwanzaa, a Blessed Ramadan, or whatever is true to you.
Merry Christmas!