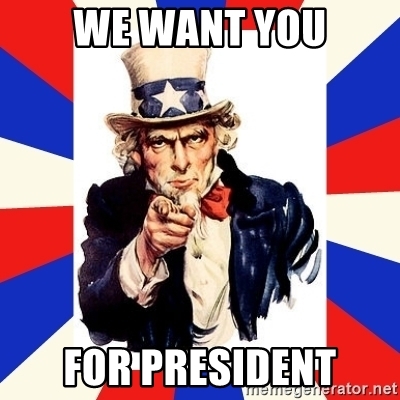 It is 2020. Weirder things have happened. It is an election year. Why not you?

According to BallotPedia, 1,224 people filed with the Federal Election Commission to run for President. Many of those have dropped out. In most states though, there were more candidates running than just the 2 most famous candidates. In mine, there were another 19. Why not you?

You may never have the backing to make a run for the President of the United States of America. You may never aspire to be in that role. You may never wish that role on an enemy! And yet you may very well wield way more influence than whichever candidate gets that role for the next 4 years once this thing finally gets certified. Think about it this way...

If you own a business, lead a business, or lead a Not-For-Profit, you impact the day-to-day life of your team way more than the President of the good old USA. You have the ability to hire, fire, promote, demote, bonus, or furlough your people. You can encourage, envision, engage, and inspire people - lead them into a future that they wouldn’t have gone without you. That’s leadership. That’s you.

There are a few leadership attributes that we all tend to expect of leaders. We expect leaders to be honest, to be trustworthy, to have integrity, to be believable. All the charisma and dynamism in the world won’t help if the leader isn’t trustworthy. We want to follow people who are authentic, genuine, and true to their word. People do not want to follow someone they can’t trust.

At the same time, we also expect leaders to have some charisma and dynamism; to be inspiring. Bland and boring rarely works for leaders. People expect passion – a contagious passion that gets us excited about doing, about going, about following the leader.

And then there’s vision. We expect leaders to have it; to be able to see beyond the immediate and have a goal, a destination worth going for. It’s hard to follow someone who doesn’t know where they’re going… or maybe doesn’t know how to express it. It’s not enough for someone in a leadership role to have an idea of where they’re going. They have to have a route. They have to be able to articulate that in a way that people can see it, let alone buy into it.

Think what politics have done to leadership. Rather than displaying honesty, inspiration, credibility, and vision, the political machinery has done it’s best to cause us to question those leadership attributes in the opposing candidate. Don’t make that mistake. Your leadership will never be enhanced by comparing yourself to someone else and trying to make them look worse.

This is the best time ever to help people believe in leadership again - your leadership. Honesty, credibility, inspiration, and vision are how to help your team recognize great leadership in you. You’re the leader they need for 2020 and beyone. You’re the leader who will influence far more in their everyday lives than a politician can do - even the President of the USA. You for President!